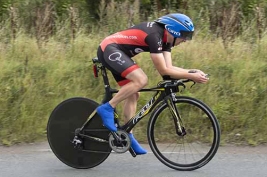 John started out as a promising young 100m/200m sprinter. After just one season he lowered his 100m PB to 11.2s. Unfortunately, after this he battled with countless injuries, never giving up on bettering his times. A couple of seasons later, John helped his team became Scottish National Under-20 4 x 100m Relay Champions and lowering his 200m PB to 22.6s.

At Loughborough University, he was plagued by injuries so decided to join the university cycling club instead.  He knew nothing about road racing, time trials, or track cycling.  One day he went along and did his first 10mile time trial on his road bike and pretty much came last.  Coming from 100m sprinting he couldn’t understand how people in the same race could beat him by minutes, not knowing that kit also makes a big difference in time trials.  After a few more TT’s with similar results, he turned his back on TT’s and dabbled in track cycling.  But in the back of his mind it was always athletics.  Over the next 7/8 years he kept going back to athletics, with the same inevitable outcome – more injuries.

Eventually John joined his wife Libby (also with btb) and began competing in time trials.  He didn’t have any kit of his own so had to squeeze himself into his wife’s kit.  Luckily he had his own shoes. Coming from a sprinting background John is always complaining that time trials are too long for him, so will be focusing on track cycling at Derby Velodrome with Steve (btb men’s team captain) his partner in crime.

25 miles – I beat some more people