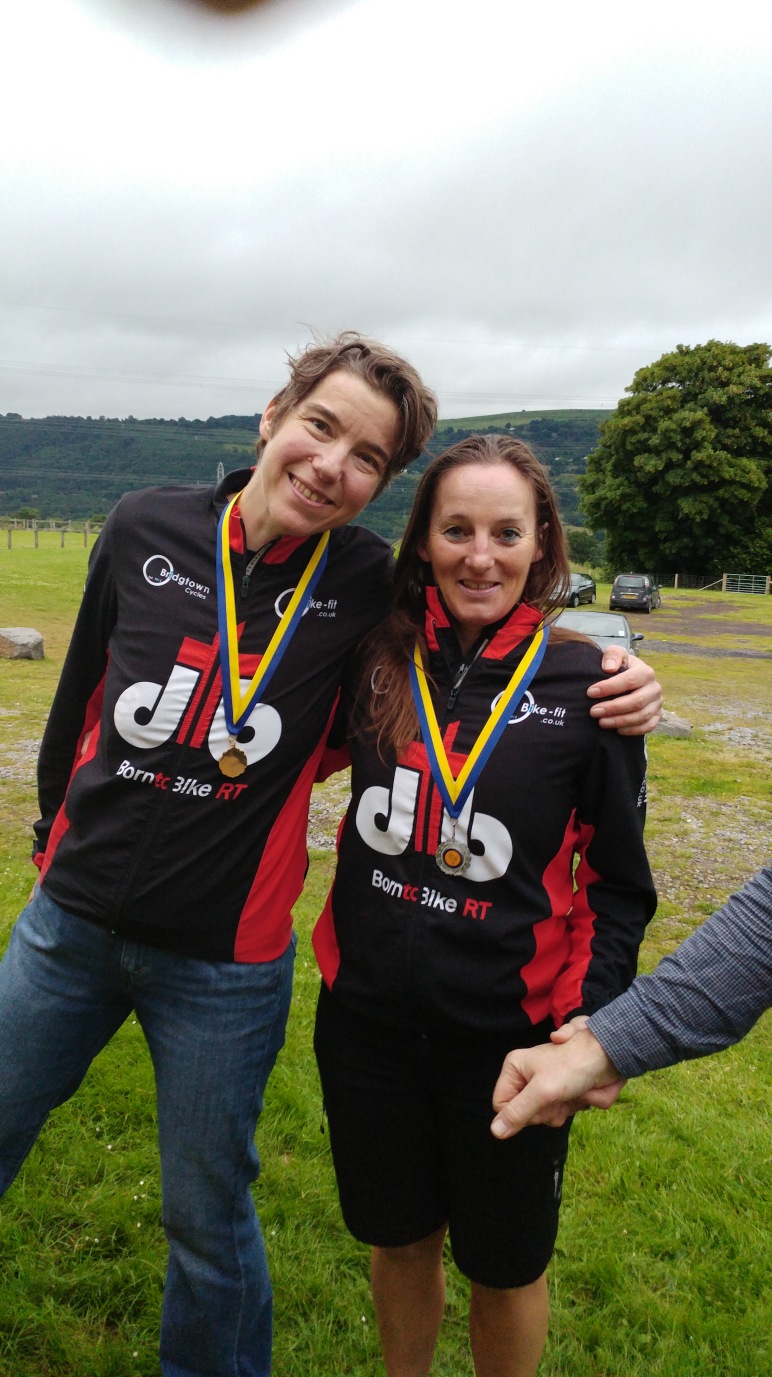 In brief: I am amazed with my first 12: 258 miles, 4 gold, 1 bronze medal (being a vet helps …), National Age Group record and new course record. It was a very close race with Crystal, and I can’t believe I did it. Lynne did a great ride with 242 miles, to get Born to Bike Gold and Bronze overall and gold and silver in the Vet’s Championship. Such a shame that Jasmijn and Helen couldn’t ride – we would have probably smashed the Women’s Team Competition Record …

A new chapter for me – I never ventured into the territory of a 12 h race before, but after deliberately joining a Club with a lot of strong long distance riders I think I was destined to give it a go. Loads and loads of miles on the TT bike were done in preparation for this event, enough to ask people ‘Why don’t you drive if you want to get from Milton Keynes to Sheffield or Didcot?’ Recent power PBs in the National 50 and the E2/100 made me confident that I was in form, a recce of the parts of the course I did not know from last years 100 made me confident that I do like the course, and a lot of planning got into what food my body could take (I thought), and I had so many option available … And a perfect support team of two – one keeping an eye on the competition and riders, one who I knew would always be ready with a sharp comment to make me smile again, and both in the desire to deliver the shortest pit stops possible …

The course in Abergavenny was considered to be pretty fast and possible to deliver 300+ miles for the guys (which is just missed …). I decided to put my head in the sand and not even check the weather forecast beforehand, as I had to ride anyway. But I had a second TT bike ready with aluminium rims, offering better breaking power. In the end I didn’t want to lose time changing, and the course was OK on the carbon rims when ridden carefully – so two spare bikes travelled to Wales in a ‘better prepared than sorry’ (as did most of the kit we packed – we were somewhat over-prepared …).

The morning was nice, not too cold, and the start was really chilled. Checking to bike over, yes, but no real warm-up needed. Setting out I really struggled with keeping my power target of 175 W (I wanted to be conservative and do 170 W), and for the first 90 miles I actually rode on 183 W. Having the number on your bum always helps to forget about the niggles and anxieties you have in other rides, so descending to Monmouth was no problem at all, and I only told myself off for passing other riders and going too hard. I tried to keep the power down but couldn’t really … The first rest stop did shock my supporters a bit, I think, as I was gone way quicker than they expected. I only thought if this is a close race, one way to make up for usually being the slower rider is to stop less. So off I shot again up to Hereford, and that leg was clearly easier than it was during the recce. Again, a number on your bum makes you forget about rough road surfaces, and the biggest worry was not to overcook the inclines … The traffic light was red both ways, but it was a welcome moment to put the feet down and eat a gel whilst standing. Getting close to Hereford was the first time I came passed Lynne and waved a hello, having missed her at the start. Other than passing other riders I cannot say that I had a clue what was going on around me. Crystal seemed awfully close at the Hereford turn, but I couldn’t remember hat number she was off at, so that didn’t mean much. I expected my supporters at 91 miles, before the Abergavenny roundabout, but they had not yet passed me since I last saw them keeping an eye out on the field and timing riders. Drinks needed rationing and I was pleased that they would be stationary for the main loops – and to find them at the agreed place when coming to Raglan for the first time at around 100 miles. I still didn’t fancy solid food, but only protein shakes and gels … And off I went again, hearing that I am ahead of Crystal. After that I never heard a lot about the positioning, but got the gist that I am doing well from the way Steve and Dave were constantly cheering me on when I was passing them. Steve might have said that I was in the lead, but to be honest: I can’t remember.

It was getting quite warm at some point, and cross winds came up on the A40 bit from Monmouth to the Ragnar turn, making me slightly uncomfortable on the bike. The I thought I am bonking and losing power when doing the A40 from Ragnar to Abergavenny for the first time, and was so pleased to find out that it wasn’t me bonking but it strong headwind, as things suddenly were extremely easy after turning at the Abergavenny roundabout. And I was pleased that this leg, which was part of the finishing circuit was my preferred leg. The second time on the mid-day circuit the rain started to settle in, and even though it intermittently stopped, it was pretty much there till the end of the ride. It stopped long enough to dry out in-between, only to be soaked again half an hour later. And to wonder with 3 h to go whether the body spending a lot of energy on heating me up might give me hypothermia? More gels was the solution, but by then I also had to concentrate on eating and drinking was clearly becoming less frequent … And all that thought out solid food was not used. Not even the tested almond butter bacon sandwiches – the body could not take anything solid. So protein shakes and gels it was – I think about 20 😮 And opening them became more and more difficult, probably a sign of exhaustion. At times my right leg must have looked like that of an extreme body builder, with 6 empty gel wrapped stuffed in. That cannot have been aero, but where else to put them? Fresh gels in the left leg, waste disposal in the right, and more gels in the top tube bag …

I was surprised how few riders were on the course, compared to last years 100. Round and round you go, singing along in my head and constantly telling myself not to overcook it. The power had settled on 177 W, and stayed at that. I couldn’t believe that I was still keeping 21.5 – 21.7 mph – I thought I wouldn’t be able to even achieve 21. And was certain that it would drop on the finishing circuit, which it didn’t. 6 h was a high- and low point, half time but still sooo long to go. 8 h felt good, but surprisingly at 9 h I was almost ready to pack. I hated everything, even though the body ached not worse than anticipated. Rotating the shoulders at every roundabout and doing the neck stretches clearly helped. But I did see why people say they are relieved when getting on the finishing circuit, and I was longing to sit up a bit more. On the other hand I clearly wanted a 4th round on the mid-day circuit as it was faster, and I was chuffed that I got it. With the rain settling in I saw even less of other riders around me, and spotted Lynne less frequently. It’s amazing how you can be in your own little world for 12 hours … A pain cave, but a world of focus and concentration. The knowledge that I can go for a ‘real’ medal, not ‘just an age group win’. That was worth fighting for, right? So I did, and didn’t let go. Yes, the roads were monotonous, the highpoints was coming past Steve who was always so cheerful and gave me the impression that I was doing well. Dave told me every time that I shall ‘dip deep’ and I never had enough breath to yell back ‘what do you think I am doing?’. Plus Kerry always cheering me on – and off course Burti and Geoff, my own supporters. The sign language of what I needed was getting better and better, chamois cream was frequently asked for seeing the sogging wet clothes, and an easier to do up zip on the skin suit would have clearly saved another 10 s and got me more miles. As would the Di2 batteries not running out and making me ride the last 7 miles or so in the small front chainring. By then I was told ‘Go for the win’ and I so hoped that this misfortune would not cost me the win …

Seeing others finish over the last hour (the first rider finished approximately 52 minutes before me) was easier than I thought, by then I was digging in for the win and found extra energy to keep me going strong. I was chuffed when passing a timekeeper 1.5 minutes after the 12 hours, and not having to go even further, and when my supporters passed me I could not believe how far it was to the next layby. I was tempted to just stop and ask them to come back, but knew a cool down would be good. Getting off the bike? Only by laying the bike on the floor and me being held up. A change of clothes, then lying down in the car. On the drive back to the HQ my legs were shaking, and I was never ever as exhausted in my whole life. Waiting for the final results took ages, and even though I was fairly certain I won (Crystal thought she did 256, I 257) I felt it was too close to not see if as an official result before really believing it.

I am sorry I can’t say more about the whole race – I guess it was a fast course but with elevations, and I surprised myself that the lumpy back road of the finishing didn’t slow my speed down. Thanks to all people encouraging me riding to constant power and telling me it can be done. You are right! And overcooking it a bit at the beginning was not detrimental. I still much rather ride a 12 than support it, I have to say. The rain didn’t help in general, but I think it did actually helped me as I was not overheating. And I was glad that the Trip Socks were keeping my calves warm.

I am still amazed with the mileage, and think the list of achievements is as follows (it pays out to be over 40), but I might be wrong:

4th on the Women’s All-Times Fastest (or Furthest) list

Not bad for a first go at a 12. Yes – I played high risk, and went for all or nothing. But I won and am just chuffed and happy and thankful to all the people who supported me in this journey!!!!